Several members have been competing in a variety of events since the last update.  Well done everyone.  Results below:

Whilst we were enjoying ourselves at the AHMF raising coffee morning (pics in the Gallery) Lee Holdaway was having a very long hard day competing in Ironman Lanzarote. Lee's ambition was to complete his 5th successive one so many congratulations on a fantastic achievement. Lee's overall time was 14:12:27 with splits:

Below is a proud photo of Ironkid Harry Holdaway who competed in the childrens race (run,swim,run) and Ironman Lee Holdaway.

Jon Fielden ran the above Ultra event which starts from Farnham, Surrey and finishes at Knockholt Pound on the outskirts of greater London.  A gruelling route which has a total climb on 5,600' !  Jon's time was a very creditable 10:11:36.  He had this to say:


"Well that's my second 50 miler in five weeks done. The North Downs Way 50 was fantastic. The course is much harder than the South Downs Way 50 and it really is a race of two halves. The first half is pretty flat and fast then you hit Box Hill and all bets are off for the second half. Hills, steps (and if I never see another step in my life it is too soon), more hills, more steps, another hill, yet more steps. You get the picture.

Although the course was a bit lumpy yesterday it was also stunning. The NDW runs through some of the most beautiful countryside in the whole country. I ran through several woods that were full of bluebells and the views from parts of the course were stunning. You can see so much of the south east stretching out below you from the top of Box Hill. It nearly made the climb up worth it. Nearly.

If you had told me five weeks ago that I would finish the SDW50 and NDW50 in 10:35 and 10:11 respectively I wouldn't have believed you. I've really surprised myself over the last few weeks, with both the fact that I could pull out two half decent performances over this distance and also with the fact that I felt pretty good in doing so.

Both races were great in their own ways. The SDW50 was just epic. Those of us that were there will never forget it. The wind, rain and fog on the ridge between Southease and Alfriston was like nothing I have ever experienced. At one point I just screamed into the wind at the top of my voice. It was a combination of the sentiments - 'gosh this is tricky', 'this is strangely fun' and 'come on world, is this the best you have got?'. Obviously that isn't quite the language I was thinking at the time but you get the picture. I felt much better after that and the masochistic streak in me (which apparently is even bigger than I thought) meant that I relished those conditions. Bring it on!

Meeting Tim at Alfriston and finishing the race together was perfect. Fantastic way of finishing my first 50. I got to see Natasha at the finish (complete with cup of tea and sausage sandwich) then cheer in Alan as he finished. I still think he got the biggest cheer of the day! Thanks also to Teresa for very early and very late lifts to the start and finish and an awful lot of encouragement.

A week off then it was back in the saddle for the lead up to the NDW50. I need to thank Zoey for her help in keeping my legs together at this stage, which made a huge difference.

The NDW50 was also great, but very different. Did I mention there were a lot of hills and steps? The fact that I wasn't running into a howling gale in the peeing rain was one slight difference. One field we had to go through had a big sign on the entrance gate 'danger - bull in field'. I didn't see the bull in question but if there were field by field splits I know which one would have been my quickest!

As with the SDW50, Natasha was helping at the finish of the NDW50 and was on hand with a hot dog and cup of tea. That was after I gave her a bear hug. Considering how bad I must have smelled at that stage, I am still surprised she accepted the hug and didn't make a break for freedom. I don't think I gave her a choice...

It has been an amazing five weeks and two races. I have learned so much about my running and myself over those two days. Apparently I am not as bad a runner as I thought I was, I have a higher tolerance for pain and seem to thrive on this type of distance. Thanks also to everyone who was a part of this. I couldn't have done it without you.

On to the next one!" 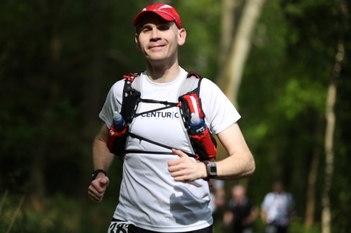 Despite having his goggles knocked off in the swim Adrian Collins completed the above event in a time of 1:27:08.  The race started with a 750m swim up the River Avon, followed by a  20km scenic, hilly bike and finally a 5km out and back run along the towpath. Adrian's split times were:

Following in her partner Adrian's footsteps, Shirley Giles completed her first ever Sprint Triathlon at Arundel.  A 400m pool swim, challenging 20km bike & 5km run, Shirley did extremely well to finish in a time of 1:38:57.  Shirley's splits were: