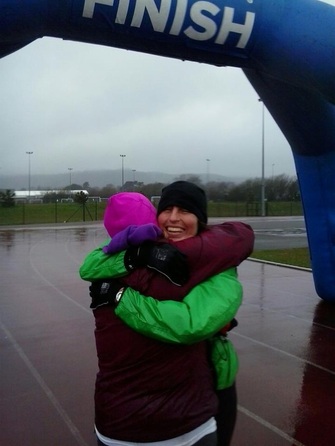 This picture encapsulates the feelings that Susie Casebourne, Tim Cox, Jon Fielden & Alan Bennett had at the end of a VERY long day on Saturday.
The intrepid 4 took on the challenge of running the SDW50, no mean feat in itself but they could not have imagined the dreadful conditions they would have to endure.
The weather started off seemingly perfect running conditions but soon deteriorated into cold driving rain & wind.
Alan had this to say:

"The conditions were absolutely brutal - genuinely hostile. This was a day, without any fear of exaggeration, that could be best described as sustained abuse.

So many people dropping through hypothermia!

Huge respect to my good friend Mark Mark Bailey who put in a heroic effort by finally succumbed to the onset of hypothermia himself. He made the tough but ultimately correct decision to with at Southease.

Just as well because the next section through to Alfriston was literally tearing runners to pieces! I wasn't sure I was going to keep going. Took a monumental mental effort to drive myself forward.

Made it in the end in over 12 hours. A long time but I had nothing more to give, and that's pretty much the best I could do out there today.

Huge thank you for all the support at end - made it all worth while. And thanks to JP for heading out to see if I had made the road section - and putting Tre's mind at rest.

Overall a VERY challenging day at the office, but worth every minute."

Alan now has to reflect & prepare for the 100 miles in June!  Tim has only a few days to rest before the London Marathon this coming weekend! We  all wish you the best.

What a difference a day makes, Barry Ingram ran the Brighton Marathon in the hottest day of the year so far! Conditions were perfect up until the last hour of Barry's run when things got a bit hot!

Barry was very pleased with his time of 4:20:41 and raising £1000 for Cancer Research UK in the process.  Great run & great donation Barry.