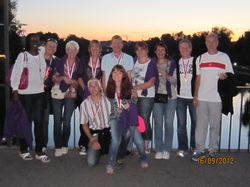 Leaving home at 4:15am the Bexhill team congregated at Colin & Claire's home in Eastbourne to be transported by minibus to Gatwick.  Well that's all except for Lina & Greg who decided to make their own way.  With the gate closing at 6:30 we thought we had cut it fine but Greg & Lina demonstrated just how close to missing a plane one can get!  As we had their boarding passes Dave suggested that we all go through security & he would wait for them. Fortunately we were delayed from boarding for 10 mins & were relieved to see them join the back of the queue; Lina glaring at Greg who had an air of 'see told you we'd make it' about him!

On landing at Munich we took a train to Munich central station then another one to Ulm, journey time 2hrs 45mins & just £16 return (British Rail take note!)

Arriving in Ulm we found our hotels.  Dave & Tim were unable to check into theirs until later so we decided to walk to the Marathon Expo to register & collect our numbers.  The usual variety of clothes & product stands greeted us one of which was testing grip strength.  Colin proceeded to win a large yellow umbrella which he was very proud of until Gill beat him!

A walk back to Dave & Tim's hotel for them to finally check in & then the search for dinner.  With thoughts turning to a long run the next morning we tried to find a restaurant in the immediate vicinity.  With not too much choice the boys spotted a sign for the 'Peach Pit' & believe it or not it was in fact a cinema & restaurant complex. (We didn't stop for a film!)  Very high class burgers but not really pre race food although plenty of carbs in the Weissbier!

Race day dawned & it was evident it was to be a beautiful day albeit a bit warm.  The marathon & half marathon started together at 9am & followed the same route with the second half of the marathon looping out to the other side of the town.  The variety of competitors included handbikes, elite athletes & Nordic walkers who walk faster with their poles than some of us can run!  The route was very scenic in parts following the river & ending up with a run through the town on cobbles (ouch!) to finish in front of the Ulm minster, the tallest cathedral in the world.  The 10km run was held in the midday heat & lapped the town twice.

We enjoyed some of the best music we have ever heard whilst running, with live bands dotted along the course.  The finishing area too had a plethora of stalls supplying among other things; nuts, fruit, popcorn, more weissbier & pots of rice pudding!  Quite a few bottles of beer were secreted in our marathon bags!

Back to the hotel for ablutions then out for a very British afternoon tea & rhubarb cake at the local quaint tea rooms.  Time then for a pre dinner drink in Chris,  Janet & Sherrill's room.  Anyone who knows Sherrill will be aware that her post marathon ritual includes a glass of bubbles. On this occasion we had bubbles, beer & red wine!  Greg realised he had locked himself out of his room (another glaring look from Lina!) & as there was no one on reception he decided to use his initiative!  He pinched the spare key for the room next door & climbed over their balcony.  Think he's got away with it unless they check the CCTV!

We chose an Italian restaurant for the evening meal which in hindsight was a very good decision.  Fortunately the Italians enjoy a lively noisy bunch of people & were happy we were having a riotous time.  However, I'm not sure about the other patrons who were out for a quiet Sunday meal!  As we headed back Tim & Greg decided to nip into the local bar for a nightcap (yet another glare from Lina!)  Dave decided to chaperone them & there started his own personal marathon.  After several Sambuca's he finished at 2am - a great pb Dave, well done!

The next morning a few of the group were a bit quiet & Tim's body didn't like him anymore!  As we toured the town we heard someone say "Are you from Bexhill?" It was Heiko, the organiser we had all e-mailed to register our entries. He said he was upset at not seeing us at the race & wanted to greet the 'International Runners' personally!

All the travelling & walking the day before the events was not conducive to good running times & some of our party were ill & injured but in the true spirit of brt we encouraged each other & recorded these times:

Sherrill Barrett  (aka Munchkin)  3:57:23 A fantastic 9th in her age group but as a true professional she wasn't happy with that!

Colin Hanks (aka Stefan.  Dropped down to half distance due to illness so some poor guy named Stefan probably had to run a marathon!)  1:52:45

A big thank you to Claire & Spiderman (aka Dave) for supporting us & looking after our bags.

Look out for Colin Hanks who may well  be dressed in Lederhosen for his next marathon.  Not sure whether vaseline or leather oil is needed for the chafing! More photos.